See the major Kharkiv sights and enjoy the views of one of the biggest and interesting Ukrainian scientific, industrial and historical center.
Click for a full list of our Kharkiv & Region Guided Tours

Liberty Square and a Kharkiv University

We start our tour from the Liberty Square - the widest square in Europe, Kharkiv State University, Gosprom Building (the first Soviet high-rise building made from solid ferro-concrete, served as a building of the government of Ukraine in 1928-1934). Then we'll walk through Shevchenko park (You can enjoy a cup of coffee and delicious pastry in one of many cafes or bistros in the park), famous Monument to the great Ukrainian poet Shevchenko (The tall tower is crowned by the bronze sculpture of the poet, depicted in grief and wrath. Sixteen figures symbolizing the struggle of Ukrainian people are mounted on the helical projections entwining the pedestal of the Monument). 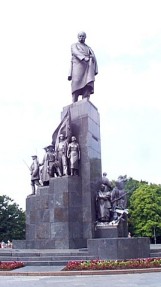 Scevchenko monumentThen we walk by the kharkiv Opera and Ballet House, Mirror Stream, Sumskaya street - the main street of the city with many old and architecturally valuable buildings. Go across the Constitution Square and come into the yard of the Pokrovsky (Protection) Cathedral (1689) - the oldest building in the city, dating to the founding of the Kharkiv fortress. A brilliant reflection of the Ukrainian Baroque era of the 17th cent. During the Second World War it sustained extensive damage and was renovated in 1960-65. The bell rower resembles a defence tower. The cathedral was part of the fortification system of the Kharkiv fortress. 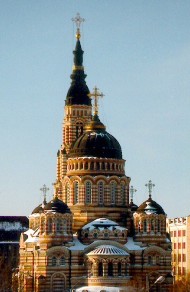 Blagovishensky Cathedral Then brief look at the outdoors exposition of heavy arms (tanks, field-guns) of WW I and WW II and walk to the University Hillock - the place near confluence of Kharkiv and Lopan rivers where in 1654 Kharkiv Fortress was built, Uspensky (Dormition) Cathedral (it's gold-domed bell-tower now serves as an organ hall where you may listen to music of great composers Bach, Beethoven and others), Blagovishensky (Blessed News) Cathedral - the biggest and most beautiful church in Kharkiv.

We'll finish the day at one of the restaurants with special Ukrainian foods and drinks.

Next time you'll see Puskinskaya and Sumskaya Streets, Palace of Wedding, Gorky Park - the most popular place of relaxation of Kharkivites, Forrest-Park, Memorial complex devoted to perished in World War II, the famous Kharkiv Metro/Subway and other interesting, beautiful and unforgettable places of Kharkiv...